Sloane, or The Raven[1], was a half-elf thief. She is now, along with her girlfriend Hurley, a dryad. She was controlled by the power of the Gaia Sash.

When the party first meet The Raven in Ep. 20: Petals to the Metal - Chapter Three, she is wearing an outfit of black leather, a full-face Raven mask, and at her waist, the Gaia Sash (which honestly kind of clashes with the black leather). She has a thorny vine whip, called, apparently, Thorn Whip.

The Gaia Sash (which is one of the Grand Relics) has no clasp and is made of what looks like brown rubber tree reeds. When Magnus touches the Gaia Sash in the Goldcliff Trust, he can see her glowing blue eyes (and he gets zapped with what feels like 10,000 volts of energy).

When the party first comes upon The Raven on Floor 20 of the Goldcliff Trust, she expresses a desire to not hurt anyone in the party, and encourages them to leave. She has become unto a god, she says, amused at her own power. The Raven is under the thrall of the Gaia Sash, but, as Taako points out in Ep. 21: Petals to the Metal - Chapter Four, it’s almost as if she's aware of the thrall and has bought into it. She can’t take the belt off — she expresses it has become a part of her in a way nobody else can understand. She says that part of her wishes she could remove it, but there is literally no way she could take it off. The party also expresses no desire to hurt her, but refuses to leave the building.

Having tried to reason with them, she brings out Thorn Whip and Magnus rushes in to attack. The Raven is incredibly powerful, managing to kill/knock two members of the party unconscious in their first fight. Magnus lands a hit on her shoulder, and she is very surprised. She bleeds green.

At that point, Hurley swings into the room through a skylight. Hurley insists that The Raven is not a killer and that her real name is Sloane. Upon Hurley's arrival, Sloane flees the scene in a gust of wind.

Hurley later explains that she and Sloane were partners and met when Hurley was attempting to arrest her for thievery. They became close to one another and raced Battle Wagons together under the aliases of The Ram and The Raven. She enlists the help of the party to beat Sloane in a race to prove to her that the powers of the Gaia Sash are not infinite, suggesting that proving this would make Sloane relinquish control of the Gaia Sash.

After Hurley and the boys manage to beat her in the race, Sloane loses control of the Gaia Sash and summons a storm and tornado. Upon the party and Hurley reaching the inside of the tornado, Sloane has already been consumed by a 10-foot pillar of vines which attack them (the pillar is described as a gigantic airdancer in appearance). Magnus attempts to tear the vines open to pull Sloane from them, but Sloane's legs have become encased in vines and she has fallen completely to the thrall of the Gaia Sash and she laughs at them. Taako, using the Umbra Staff that has just consumed fragments of an Arcane Core, manages to burn the vine pillar away. The pillar regrows new vines of Silverpoint, a poisonous barb with no known cure. Hurley pushes the party off the vine platform away from the Silverpoint and rushes in to save Sloane.

When the party awakens in the centre fountain of Goldcliff, Hurley and Sloane are next to them. Sloane is cradling Hurley's body. Hurley's skin has turned black and she has been poisoned. Taako asks Merle if he can heal her, but Sloane sadly informs the party there is nothing they can do to save her, and she whispers to Hurley who agrees to her words. Sloane thanks the party and asks if there are other objects similar to the Gaia Sash. After confirmation, she pleas to the party to find them and stop any similar tragedies from occurring. Sloane transmutes herself and Hurley into a cherry blossom tree, described to be the prettiest tree any of them had ever seen. The tree's roots and knots form the shape of two humanoid figures - a shorter figure wrapped in the arms of a taller figure. Between the roots are a ram mask, a raven mask, and the Gaia Sash.

Sloane and Hurley's voices try to break Taako out of the thrall he falls under when he picks up the Gaia Sash, but fail. The Gaia Sash is then taken by Merle, who resists the thrall.

Much later, as the Hunger descends upon her home plane, Sloane emerges from the cherry blossom tree with Hurley to save Merle's daughter Mavis, who was endangered by the calamity nearby. Both her and Hurley are now dryads - mythical forest fae spirits - presumably transformed by the power of the Gaia Sash. This transformation appears to have saved Hurley from her Silverpoint poisoning. 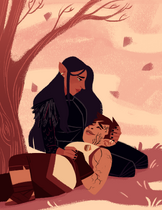 Sloane (and Hurley) by Mayorofdunktown. 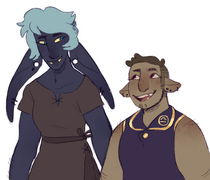 Sloane (and Hurley) by Official-spec. 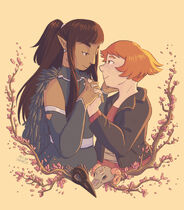 Sloane (and Hurley) by Ramblerogue.

Sloane (and Hurley) by Tuherrus.

Sloane (and Hurley) by Chewybats.