The Adventure Zone Wiki
Register
Don't have an account?
Sign In
Advertisement
in: The Balance Arc NPCs, The Eleventh Hour

Alive, but now lives as a bird

Common
Roswell is Sheriff Isaak’s deputy and acts as the primary law-enforcer of Refuge.

They are named after Sheriff Isaak's father (a safety inspector)

Roswell is an Earth Elemental created by Jack. Their body is made of living red clay contained by a suit of armor.[1] Roswell has a faint yellow glow all around them, perhaps remnants of the spell that gave them life. The visor of their armor is pulled down, and dark red clay seeps out of the joints of the suit. They are as wide as they are tall and they are very large in both dimensions.

A vermillion flycatcher[2] perched atop their shoulder acts as both their voice and as an extension of their body. When asked, they indicated that they did not consider their armored body and bird to be separate beings. The vermillion flycatcher is a red bird found in canyon regions.

Though Roswell was made from a spell, they operate under their own volition. They are unable to be controlled by magic unless someone speaks their command word: "junebug". It’s their job to keep the town safe.

Roswell’s voice is high-pitched, as they speak through the mouth of a very small bird.

Roswell carries a massive halberd. They have a deputy’s star affixed to their armor. (JUSTIN: Wait, how is it affixed? GRIFFIN: Poorly.)

Roswell was created in the bubble, indicating perhaps that they are about one to one and a half years old. They could identify everyone in town, given enough time.

In most of the loops, Roswell dies in the fire in the bank just before noon. 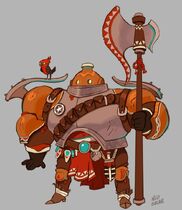 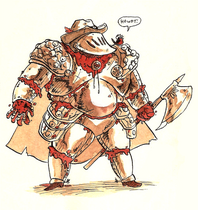 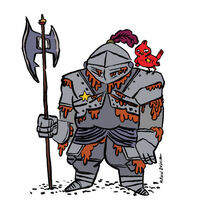 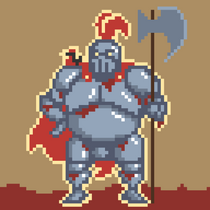 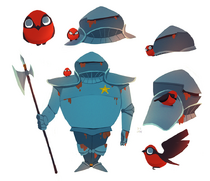 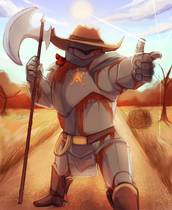