The Adventure Zone Wiki
Register
Don't have an account?
Sign In
Advertisement
in: The Balance Arc NPCs, Here There Be Gerblins, Petals to the Metal,
and 6 more

The Red Robes, from the Institute of Planar Research and Exploration (IPRE), are a group of explorers and scientists who created the Grand Relics. The members are known by the red robes they sport.

Murder on the Rockport Limited[]

Griffin jokingly implies that one of the Tom Bodetts in Rockport was a villain who pulls a red robe over his head and vanishes.

The first known appearance of a Red Robe is in Ep. 27. Magnus immediately tries to punch it, twice, and chop it with Railsplitter, but nothing connects. Inside the robe is a black void with a tiny speck of white light that pulses as it speaks.

"ARE YOU AFRAID?" the Red Robe whisper-shouts. The boys hedge that everyone is a little afraid sometimes. "YOU DO NOT KNOW HOW TO BE AFRAID," they state.

The Red Robe projects a holographic series of familiar faces and narrates through them:

"GUNDREN ROCKSEEKER. MAGIC BRIAN. JENKINS. SLOANE. CAPTAIN BAIN. THIS IS THE TRUE NATURE OF MAN. THE WANT, THE HUNGER. IT CONSUMES EVERYTHING IT TOUCHES. IT CAN'T BE STOPPED OR CHANGED. IT'S THE END OF EVERYTHING. THIS IS YOUR FIRST LESSON."

And then it disappears in a spout of flame.

The mysterious red robed figure appears once again in Ep. 35. As Lucas is showing the group his interdimensional mirror, dubbed the "Cosmoscope," time freezes. Lucas, Noelle, Killian and Carey have all frozen in place, and the rotating disks have stopped. Taako, Merle and Magnus hear a low, gravely voice from behind them, asking, “What’s bigger than this?”

Turning around, the three see the mysterious red-robed figure from the previous story arc. Magnus tries to hit it, but it is still incorporeal. (Hilariously, he then steps into the intangible figure and jokes that he's a Red Robe, which is later revealed to be accidental foreshadowing.) The figure motions to the disks, and says that billions of lives have been destroyed in pursuit of this power. They wave their hand and from a crate in the back of the room, some small gemstone disks crash out. A black cloud emerges from one of the gemstones and floats up to the disks floating in the room, and consumes the disks one by one. The three can hear screams coming from each disk as they are consumed. The figure snaps their fingers and the cloud disappears.

The figure stops mid-sentence and seems to notice Taako’s umbra staff. They ask where he found it, and the group begin to describe the red-robed skeleton they found during Here There Be Gerblins. The figure starts to shudder, red electricity crackling around them. They yell "You found her?" before bursting into flames and disappearing.

Their location, members, and motives are unknown as of now, save for one — Magnus Burnsides, whose apparent ties to the organization were revealed in the conclusion to The Eleventh Hour. However, at least one Red Robe has been keeping an eye on the PCs, with the apparent goal of "protecting them."

In episode 57 of The Suffering Game arc, it was finally revealed that the anonymous Red Robe was in fact Barry Bluejeans. It was further revealed that the Red Robes originate in another universe, that they have the ability to travel between universes, and that they have in fact done so many times. Their method of travel is a silvery ship, which seems to be able to transport them even if their physical forms are destroyed.

And now for more more spoilers.

In episode 59, the identities of all Red Robes are revealed to us. They are:

It was also revealed that the Red Robes hail from a universe where they worked for an organization called the Institute of Planar Research and Exploration (IPRE). The force blocking their memories was a child of the Voidfish, which had been hidden in Lucretia's office. Since a voidfish's power does not work on the undead, Barry was able to retain the memories in his lich form but lost them again when inhabiting a body. 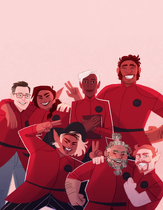 The Red Robes by Mayorofdunktown.

The Red Robes by Enchillama. 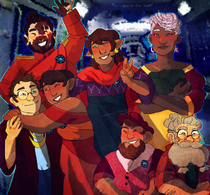 The Red Robes by Fishfingersandscarves. 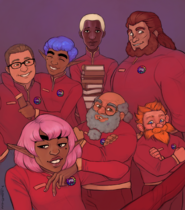 The Red Robes by Phemiec. 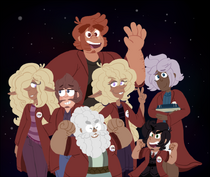 The Red Robes by Paradoxgavel. 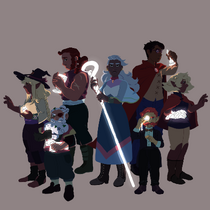 The Red Robes by Elkstyle. 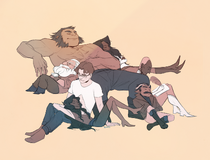 The Red Robes by Zuoji.

The Red Robes by Becpng. 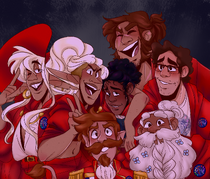 The Red Robes by Midnigtartist.
Community content is available under CC-BY-SA unless otherwise noted.
Advertisement