Deceased
Banished to the Astral Plane

Magic Brian is a Drow wizard and ex-Seeker for the Bureau of Balance.

Before the events of Here There Be Gerblins, Magic Brian was a Seeker for the Bureau of Balance. Killian considered him to be one of the most accomplished, powerful wizards she had ever met in all of her days.

At some point, Magic Brian became engaged to an unknown person.

The Boys first encounter “The Black Spider” in Wave Echo Cave while searching for their employer, Gundren Rockseeker. He inquires whether they seek the Phoenix Fire Gauntlet, but the effects of the Voidfish render many of his words static-y. After seeing their confusion, he is welcoming and cordial to the boys and reveals his true name as Brian. Or Magic Brian, for clarity. While he and Taako hit it off immediately (bonding over their similar accents) and the Tres Horny Boys have no problem with his imprisonment of Killian, they do object to his plans on Gundren and enter a fight with Magic Brian and his actual humongous pet black spider (coincidentally named Spider Bryan). Magic Brian nearly kills Taako with one hit of Magic Missile, but is eventually defeated by the combined efforts of Merle, Magnus, Renee the giant robot, and Taako’s “Abraca-FUCK YOU” Magic Missile.

As a final ploy, Magic Brian attempts a switcheroo by disguising himself as Gundren Rockseeker while the two are both obscured by the ledge of a massive pit. Magnus immediately sees through this charade (mostly due to Magic Brian maintaining his ridiculous accent) and finishes him off, Sparta style, by kicking him into the pit. Magic Brian then proceeds to fall for roughly twenty seconds before weakly proclaiming, "Oh, I've landed on Bryan..." referring to Spider Bryan, then expressing how proud he is that the adventurers have solved his magical riddle. Killian later confirms his death.

He was keeping a wedding invitation for his marriage ceremony in his pocket. He was going to invite Taako to the wedding but instead of RSVPing to it, Taako murdered him.

Some time later,[1] Magic Brian returns as one of three spiritual escapees from the Astral Plane, who have taken robotic form and attempt to take vengeance on the main party. He reveals that he had a wedding invitation for Taako. Shortly after, Brian and his two companions were banished back to the Astral Plane by Merle.[2]

Magic Brian is a wizard and can do magic, and he also likely has the innate abilities common to Dark Elves (e.g. dark vision).

The following are the spells known by Magic Brian.

(Note: most low-level spells can be cast at an additionally higher level for a stronger effect.)

The dead have no items, especially after Taako is done with them. 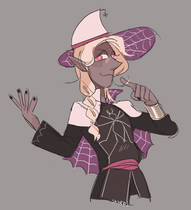 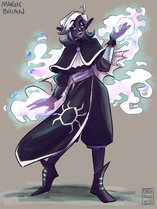 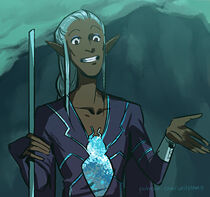 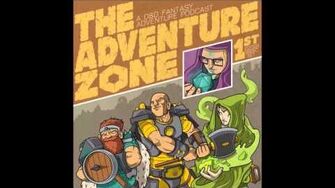