Common
Lucas Miller is a scientist and a 'consultant' for the Bureau of Balance. It's noted that even though he is allowed onto the moonbase, he does not have a bracer and the reasons for his presence are unclear.

Lucas eventually loses control of the Philosopher's Stone, and the party is sent to reclaim it and apprehend Lucas. Trapped inside of his own lab, Lucas leads the party to both his rescue and prevention of the world's destruction. Lucas communicates with the party through The Director's necklace.

Lucas is extremely intelligent, coming from an illustrious family of inventors. He specializes in robots, elevators, planar research, and illegal Grand Relic research. He has invented many different robots and gadgets including Hodge Podge, a robot designed to educate kids. He has also invented a conduit that allows him to steal fizzy lifting ghost.

He also seems to have some medical knowledge, fixing up himself and Merle in the medbay. 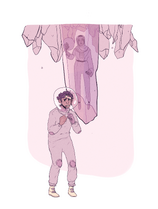 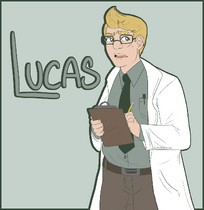 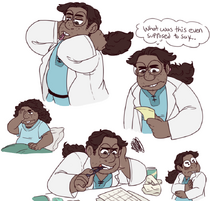 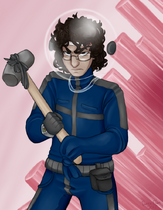 Retrieved from "https://theadventurezone.fandom.com/wiki/Lucas_Miller?oldid=19997"
Community content is available under CC-BY-SA unless otherwise noted.