The Adventure Zone Wiki
Register
Don't have an account?
Sign In
Advertisement
in: The Balance Arc NPCs, The Crystal Kingdom, Lunar Interlude, The Suffering Game

Glowing red (in skeletal form)
Kravitz is a bounty hunter working for The Raven Queen (not to be confused with The Raven), both a member of her retinue and her charge.[1] Kravitz is presumed to reside within the Astral Plane, described by Griffin as being "Kravitz's, like, home." He usually speaks with a Cockney accent, but possesses the ability to switch to others and drops the accent entirely when not working.

His initial form is that of a strikingly handsome, dark-haired man described as wearing a fancy suit covered by a long black, flowing, cowled robe. He keeps raven feathers in an internal pocket of this robe in order to communicate with The Raven Queen.

His second known form sheds the human aspect and appears skeletal in nature, described as having glowing red eyes and a scythe in hand. This form greatly resembles the stereotypical “Grim Reaper” figure.

Not much has been revealed about Kravitz's life beyond what he told Taako in Episode 50:

Kravitz: I was given a pretty difficult choice when I was faced with the career of being a bounty hunter for the goddess of death. I didn't grow up wanting to be that, of course.

Kravitz: No. I wanted to be a conductor. But unfortunately, you know, just... life finds a way... or death, I guess, the goddess of death.

Griffin later clarified in a tweet that Kravitz wanted to be an orchestral conductor, not a train conductor.[2]

Kravitz has likely been a part of The Raven Queen's retinue for a long period of time, as he has seen things that most adventurers, "given ten lifetimes, would never even dream of."

Kravitz makes an appearance in Episode 49, sitting on the couch in the boys' private dorm, stating that the boys have added to their death count lately and they need to talk.

As of Episode 50, Kravitz is a love interest for Taako. They initially go to the Chug N' Squeeze to discuss the fate of the people of Refuge, but this transitions into a pseudo-date. Afterwards, the Umbra Staff attempts to shoot Kravitz in the back with a Scorching Ray. Taako points the Umbra Staff at the sky instead. Kravitz inspects the Umbra Staff, claiming that it is harboring a powerful undead being such as a lich. Kravitz and Taako discuss meeting up for another date eventually, and Kravitz cuts a rift with his scythe and departs.

In Episode 56, Kravitz is seen being drowned by a thick tar-like liquid in the Astral Plane. He is able to surface momentarily, but is dragged down again.

In Episode 58, Kravitz frees himself from the black oil, thrashing out of the sea and cutting away strands with his scythe. He fends off hands materialized from the oil and barricades himself in the Eternal Stockade, cutting a slice through the air with his scythe to escape into the Material Plane. When this fails, he attempts to communicate with The Raven Queen, seeking comfort and guidance, but receives no answer for the first time since he joined her retinue.

In Episode 67, it is mentioned that Kravitz makes a deal with an unknown entity, presumably to escape the Astral Plane.

In Episode 68, Kravitz reunites with Taako. They kiss and then declare their love for each other. Kravitz is introduced to Lup and Barry but quickly transforms to his skeletal form and flies off to help defeat The Hunger.

In the Balance finale, Kravitz and Taako are officially dating, and are planning a vacation together. He is Taako’s date to Killian and Carey’s wedding, where Taako holds his hand and finds it feels warm. Griffin later stated the warmth was due to love.

Taako and Kravitz are still "paramours" ten years after the Story and Song. They appear to live together, although it was not stated outright.

Kravitz plays a larger role in the graphic novels than he does in the podcast. Unlike in the podcast, in the fourth graphic novel The Adventure Zone: Crystal Kingdom, Taako convinces Kravitz to agree to a ceasefire after their encounter in Upsy's chamber. He agrees to help the group find Lucas and the Philosopher's Stone before reaping them, because if the mortal world turned to crystal he'd have to "spend Candlenights processing a planet's world of whiny souls." In exchange, he'd like Taako, Magnus, Merle, and Noelle to "come [with him] peacefully."[4]

Kravitz travels with Taako, Magnus, Merle, Carey, and Noelle through Lucas's lab to the Robot Manufacturing Center, where he helps the group defeat Maarvy, Magic Brian, and Jenkins. He ushers the defeated souls through a rift, returning them to the Astral Plane.

They continue on to the Main Experimental Lab; Taako and Kravitz flirt while walking. Upon arriving in the lab, Kravitz insists he must reap Lucas, the boys, and Noelle in order to restore balance and order—even if it's "not what he would personally prefer."[5] He asks Taako to come with him peacefully. Taako refuses. Legion climbs through Lucas's mirror and forcibly drags Kravitz back to the Astral Plane.

After Legion is defeated, Kravitz returns and calls off the bounty on Taako, Magnus and Merle; unlike in the podcast, he does not play a game for their souls but makes a judgement call. Before leaving, he asks Taako if he can call him; Taako asks if Kravitz has his number, to which Kravitz replies, "I sure do... it's eight."

Like in the podcast, Kravitz tells Magnus he will deliver Magnus's message to Julia. 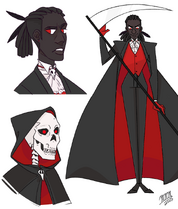 Kravitz by The Pigeon Queen. 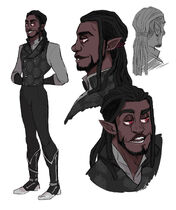 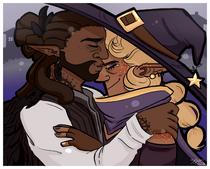 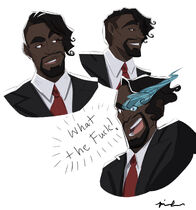 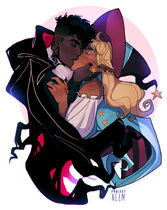 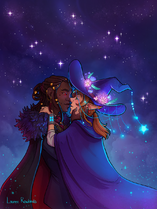 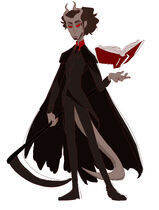 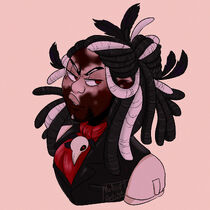 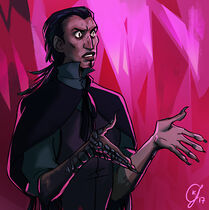