Kepler is a fictional ski resort town located in the real-life U.S. state of West Virginia, and one of the main settings of the Amnesty campaign, alongside Sylvain. It is within the National Radio Quiet Zone, which limits the usage of radio, cellular and wi-fi service.[1]

Once a town with a thriving economy, it is now slowly dying off due to the neighboring town, Snowshoe, taking away visitors. In an effort to keep the town alive, its residents have rebranded it as a tourist attraction. Some have taken to advertising its scenic views (hiking trails, etc.) while others, like Edmund Chicane and Kirby, have tried to brand the town as a cryptozoological hotspot.

Kepler is located on the sparsely populated eastern edge of West Virginia in the Monongahela National Forest. It bordered to the south by the Greenbrier River and is adjacent to Green Bank, West Virginia, home to the world's largest steerable radio telescope. The area surrounding Green Bank makes up the National Radio Quiet Zone, which Kepler falls under. The local forests surrounding Kepler are mainly made up of pine trees.

A lodge owned and run by Mama. It secretly houses the many monsters and cryptids who have been banished from their homeworld, Sylvain.

A cave located in the middle of the Monongahela Forest where the Beast is confronted. Is sometimes mistakenly called "Crooked Ben Cave".

The gate is a stone archway in the middle of the Monongahela Forest. According to Mama, it is a gateway between this world and the more magical world, Sylvain.

Kepler's ski resort is reached by a funicular and features alpine architecture. However, the resort is largely abandoned, with few people visiting and many buildings shuttered. It also contains a restaurant called the 'Wolf Ember' that serves the best French onion soup. It is the current slope of the Hornets.

A roadside cryptid museum owned and run by Edmund Chicane.

Main article: H2Whoa: That Was Fun

A waterpark located on the outskirts of Kepler. Pigeon Wilson states in Episode 10 that it's on the opposite side of town from the Monongahela Forest, which may place it to the south and closer to the Greenbrier River. 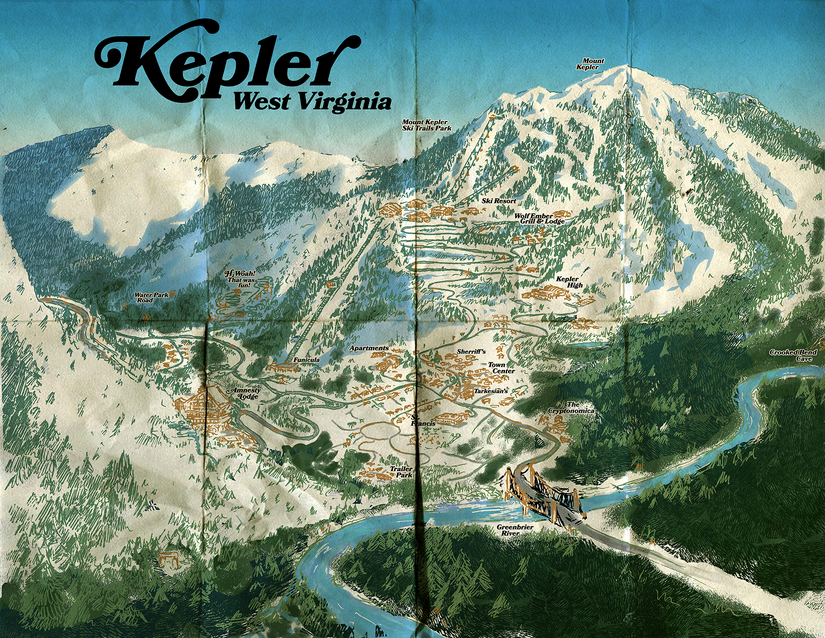