Garfield the Deals Warlock by Aitu.

—Garfield, moments before chucking a grenade.

Garfield the Deals Warlock is the sales associate at the Fantasy Costco and handles all of the buying and selling. If a customer does not have the money to pay for an item, Garfield will still accept payment in body parts and fluids. While early episodes included other employees and mentions of a manager, he now appears to be the only person that works there.[1]

The boys frequently encounter Garfield during their shopping trips and make several deals with him. Several months after the boys lost their memories, Garfield participated in an auction of unsavory artifacts with several other shady magic users, where he was outbid by Barry Bluejeans for a cloning machine. However, he still managed to acquire one somehow.

Magnus beats him in a test of mercantile wits, allowing him to purchase the mystery bag, the Lens of Straight Creepin' and the Tankard of Potent Drink for 700g. Merle tries to do the same, but, unlike Magnus, doesn't beat him.

Magnus purchases the Shield of Heroic Memories and the Glutton's fork in exchange for 1900g and his old shield, signed in blood at Garfield's request

Magnus exchanges his old chest plate and some blood for a rapier.

Magnus purchases the Grappling Hook and the Pocket Workshop for 1800g and five hairs from his sideburns. Taako exchanges The Slicer of T'peir Weir Isles for the Flaming Poisoning Raging Sword Of Doom.

Garfield decides to close down Fantasy Costco for good due to a mixture of the impending apocalypse, and being outsmarted by Taako during the boys' last trip. Needing some of Magnus' DNA, Taako makes one last deal with Garfield, and trades the Flaming Poisoning Raging Sword of Doom for some of Magnus' blood, though he casts Drawmij's Instant Summons on it so he can get it back later. Garfield gives them a key to the back room of Fantasy Costco, where it is revealed, for unspecified reasons, that Garfield was using Magnus' blood and hair to create a clone of Magnus in his cloning machine. Griffin has repeatedly stated that he has no plans to reveal those reasons.

Garfield is one of the many allies summoned by the boys to assist them in the final fight against Final John, which he does by tossing an anti-magic grenade at him and his magic flying orbs.

Garfield is inferred to be head of the finances department of the Do Good Fellowship. He appeared at the end of commitment, where he was one of the department heads sending attachments through the broadcast, alongside Grace, Joe, and Scully. His department was noted for the development of "new techniques in finance." He was also mentioned by Richard in the scene prior, to the debriefing room in the security wing. 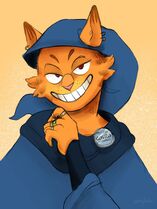 Garfield the Deals Warlock by Averyhelm. 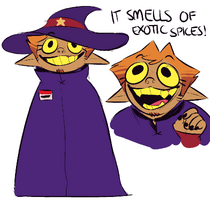 Garfield the Deals Warlock by Official-spec.

Garfield the Deals Warlock by Chewybats. 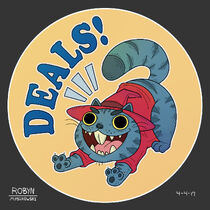