Wayne "Duck" Newton, is a player character in the Amnesty campaign controlled by Justin McElroy. Duck is a straight-laced forest ranger at the Monongahela National Forest trying to avoid his mystical destiny.

Duck is passionate about his job and takes pride in maintaining the forest and protecting the visitors and wildlife under his purview.

Duck attended Kepler High as a teenager. He was described by Justin as being "kind of a burnout [...] he'd just want to play Tony Hawk and hang out". When Duck turned eighteen, he started to experience visions revealing his destiny to one day defeat an unnamed evil. Around this time, he also manifested certain magical abilities and received a magical weapon to aid him in battle. However, Duck decided early on to ignore his supernatural calling in pursuit of a normal life. Currently in his mid 40s, he works as a forest ranger with a love of the forest and had partially convinced himself that his visions from his past were dreams. As a result of neglecting his powers, his Weird skill is -1.

Lives in Brazil to help with the reforestation effort, working alongside his childhood friend and coworker, Juno Divine, and his romantic partner, Minerva.

Ned and Duck had a unique bond of respect and trust. Because of their shared history as friends, Duck entrusted Ned with his Chosen Weapon, Beacon, for safekeeping. They were also colleagues in the Pine Guard.

Duck and Aubrey are more formal colleagues within the Pine Guard, especially in earlier episodes, but still trust and respect each other. In later episodes they have more of a friendship

Minerva began contacting him since he turned 18, describing an important destiny he was foretold to fulfil. Duck chose to ignore his visions and saw her less over time. After joining the pine guard, he began to be more friendly towards Minerva, and was genuinely saddened by her leaving. Her return did make him happy, but it's unknown whether or not it was just because he got his powers back. After the events of the finale, Duck and Minerva attempted to part ways, but were unable to and moved to Brazil together when Duck moved to help with the reforestation efforts. There was a tremendous amount of respect, and eventually they began dating. At this point, due to the fulfilled destiny and romantic relationship, they no longer have a mentor-and-mentee relationship.

Leo and Duck are neighbors and good friends. Leo often leaves groceries and sundry items at Duck's door for him when he hasn't come into the general store recently. In Episode 14, Duck saves Leo from certain death when a Pizza Hut sign comes crashing through the roof of the general store. It is later found out that Leo also worked with Minerva in the past as well, and was seen briefly as a mentor and support after Minerva left. It was also revealed that Leo left Beacon for Duck to find, which implies that he also created the sword.

Beacon is a sentient magic sword Duck owned ever since he found it outside an abandoned building, his arrival announced by Minerva. Before joining the pine guard, he was entrusted it to Ned who kept the sword in the Cryptonomica. Beacon is far more rash and violent than Duck, willing to kill the monster they were using as a hostage. They frequently argue, but still fight as a team. After the events of Episode 36, when Beacon fulfilled his destiny, Duck said that him missing Beacon is not technically true, but he was glad he was there.

Jane is Duck's younger sister, who is only actually seen in flashbacks. When she was a child (and Duck was 18), Duck had a dream of rescuing her from a house fire. When he woke up and ran out shouting, she was the one to come out and check on him, only to pout and go back into her room when he brushed her off and called her a goofus. In this flashback, Jane calls him Duck rather than Wayne, showing that while their mother is not a fan, she accepts his nickname.

It is established that, during their adult lives, they often spend the holidays together. When on Locus Prime, The Countenance decided to try and take the form of Jane, to help put them at ease (an attempt which revolted Duck and caused him to lash out). It seems that Duck cares for his sister a great deal.

Duck's mother is never seen, and it is not mentioned whether or not they get along. However, it is mentioned when Minerva visited him in his teenage years that his mom "hates" his self-imposed nickname, and that he knew Minerva could not have been a friend of his mom's because she addressed him as Duck (implying that his mother and her friends called him Wayne).

Billy was an entity who took the figure of a goat man and was encountered during the arc of the tree that could change reality. He seemed to be working for this tree with two other goat men and accosted Duck in the woods. He is injured, taken hostage, then nursed back to health by Duck, whom he seems to take a shine to. Duck even got into an argument with Minerva over this decision. When Billy is given the limited ability to speak, Duck is the first of the 3 words he can say. During the lead-up to the finale, Duck visits Billy and it is revealed that he is in actuality a four-armed person, and was deteriorating, as he was not meant to be on Earth this long. Billy also informs Duck about the existence of Locus Prime. Duck strikes Billy down as he is focused on his game, seemingly upon Billy's request and/or as a mercy kill.

When summoned by Aubrey on Locus Prime, Billy helps Duck and crew not be harmed by the Countenance. Afterwards, Duck expresses happiness that Billy is back and well, but he has much to help fix, which he agrees with. Billy also assures Duck that he did not delete Billy's dad.

Through all of this, they seemed to be friendly with each other, making it likely that they are somewhat friends.

Juno is Duck's coworker and childhood friend. They grew up together and have a companionable relationship. It is mentioned that, when they were teens, they and other friends would get high together. After the finale, she moves with Duck and Minerva to Brazil. She playfully holds her higher rank above his head, poking fun at him for minor "infractions", which Duck is aware are goofs (although Minerva initially is not).

Pigeon Wilson is a resident of Kepler who was attacked by the abomination in arc one. She started a fire which Duck was called in to help deal with. He calmed her down, recognizing her as "Vicky's girl", and prevents a run-in with her and the police as he agrees to check out the beast. Later, he brings her in to help with the water monster. Pigeon seems to trust Duck on some levels and Duck is friendly and companionable with her.

Duck's interaction with Pigeon kicked off his joining the Pine Guard and eventually fulfilling his destiny.

On a miss, they think he's crazy and maybe dangerous too.

Gear both currently owned and lost by Duck throughout the show.

Weapons Duck has or has had in his possession. 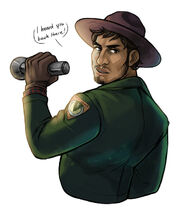 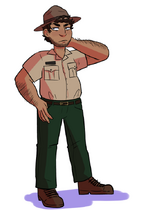 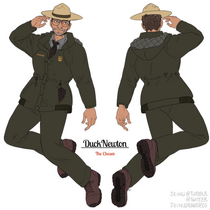 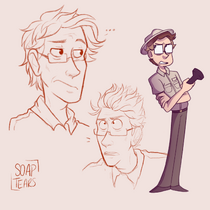 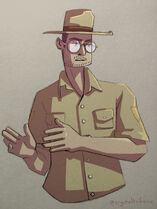 Retrieved from "https://theadventurezone.fandom.com/wiki/Duck_Newton?oldid=24046"
Community content is available under CC-BY-SA unless otherwise noted.