Davenport is a gnome man who is the ward of the Bureau of Balance's Director. He is responsible for paying the Reclaimers when they bring back a Grand Relic. Says only his own name, similar to a Pokémon.[1]

Davenport was made the captain and navigator of the IPRE expedition group. The mission was going to last two months, during which the seven of them would embark on a mission that will take them off the world and into the outer reaches of the planar system, hoping to kind of see what lies beyond it. Thanks to the Light of Creation, the Institute was able to put together his ship, "The Starblaster". The IPRE R&D team was very very excited about the name Starblaster

He went with the rest of the team to a biker bar the night before the Starblaster was to depart.

When the Hunger came, Davenport took the Starblaster up and through the storm and into the stars and past the stars, and as the ship’s bond engine kicked on, he pulled them out of the Prime Material plane. Davenport tried and failed to contact the Institute, and then he made the call. After seeing a big flash and being still out of communication with the Institute, Davenport took the Starblaster back down, and into the Prime Material Plane but soon realized they were no longer on their own planet but had instead entered Year One.

During their time in The Animal Kingdom, he helped Merle to find the location of the Light of Creation. Merle and Davenport would spent a lot of time together, which helped Davenport to let down his walls. They had a "Blazing Saddles" scene together over the campfires and talked about old war stories and ate beans from a pot. Merle realized they actually have a lot of stuff in common.

When the Hunger came, Davenport tried to stick around and wait for Magnus, but couldn't wait too long and was forced to take off without him.

After several days of fly-over reconnaissance of TAZ: (K)nights territory planet, they eventually land in the Tiered capital city.

When Davenport meets survivors of the planet, he is unsure what to do. He isn't trying to be cruel about it but he tries to approach the situation in a sort of a cold arithmetic kind of way. As far as he knows, his team members are the only people from his home world still alive and so he doesn’t want to bring other people on the ship who might complicate the mission in any way.

During episode 59, it is revealed that the reason he could only speak his own name is that his entire life's purpose was erased by the voidfish, and later by the baby voidfish as it was used to hide their journey, yet allow others to still learn of the relic wars from the voidfish. 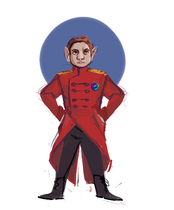 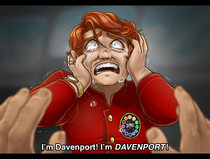 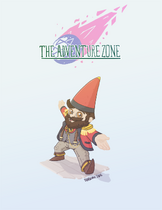 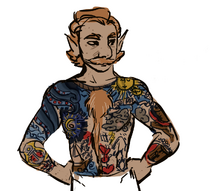 Retrieved from "https://theadventurezone.fandom.com/wiki/Davenport?oldid=19525"
Community content is available under CC-BY-SA unless otherwise noted.