Aubrey Little, stage name The Lady Flame, is a player character in the Amnesty campaign controlled by Travis McElroy. Aubrey is a small-time touring stage magician whose act centers around pyrotechnic sleight-of-hand. Her traveling companion is Dr. Harris Bonkers, PhD., a ten-pound New Zealand White Rabbit that she liberated from a laboratory.

Beyond her talents with stage magic, Aubrey has actual latent fire-based magical powers that begin to manifest during a performance at the opening of the pilot. Her powers seem to be somewhat dependent on her emotional state and can fluctuate with her mood and level of focus.

Aubrey has a "goth-punk" appearance with a pompadour undercut hairstyle and facial piercings. She wears specialized gloves for her act that allow her to create sparks with a snap of her fingers. These gloves also serve as her foci for her Spell-Slinger abilities.

She wears a denim vest that, after being enchanted by Heathcliff, has bright, shimmery red threads coursing throughout it. She also wears combat boots.

In Episode 16, Aubrey's right eye becomes "dark orange, [with a] starburst of lighter orange just around the pupil.", while her other eye remains a light brown color.

In Episode 28, her left eye takes on the same coloration as the right.

In episode 36, it is revealed that she dyes her hair red. It was implied beforehand in episode 24.

Aubrey grew up in a well-off household outside of Kepler with her mother and father. On her eighteenth birthday, the day she was going to leave her home to pursue her career as a stage magician, her mother planned on giving her the Flamebright Pendant, a special family heirloom. She changed her mind and held onto it, planning to have it adjusted for Aubrey. That night, Ned Chicane and Boyd Mosche broke in to rob their house. Aubrey heard the noise, woke up, and ran to the stairs in a panic. She tripped, hit her head on the banister, and passed out; she woke later to find her house burned to the ground, and her mother dead. Her father, however, made it out alive. After this, Aubrey left home and continued her plans, taking Dr. Harris Bonkers with her. Aubrey is unsure of the full events of what caused the fire, claiming she can almost remember it.

As of Episode 36, Aubrey is travelling across Sylvain with Dr. Harris Bonkers, Janelle, Alexandra, and her romantic partner, Dani, in order to help rebuild the world. She is also populating Sylvain with a variety of "fun trees".

Gear both currently owned and lost by Aubrey throughout the show. 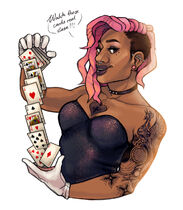 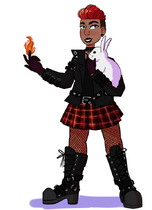 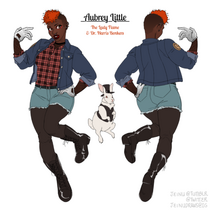 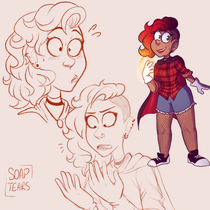 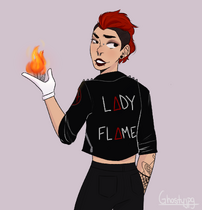 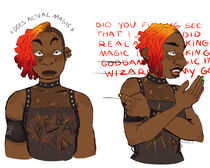 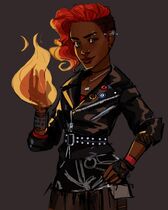 Retrieved from "https://theadventurezone.fandom.com/wiki/Aubrey_Little?oldid=23850"
Community content is available under CC-BY-SA unless otherwise noted.