Captain of the Coriolis

Amber Gris (pronounced "Amber Gree") is a player character in The Adventure Zone: Ethersea campaign. She is played by Justin McElroy.

Amber is an older woman who spent her childhood on the shores of the Einarr Plateau in the days before Founders' Wake was formed. She spent some time training with Joshy at Ol’ Joshy’s Training Ground for Psychic Soldiers Against Blink Sharks, and was the only student to actually unlock some kind of psychic ability. She is a monk who ascribes to the Way of the Astral Self.

Before teaming up with Devo and Zoox, she spent most of her time at the Cloaca in Joshy's Knuckle awaiting the "inevitable" return of the blink sharks with her fellow finners.

As mentioned, Amber spent her youth on the shores of the Einarr Plateau as the community prepared to enter the Ethersea. She was raised by her father, a fisherman, alongside her younger brother Gill. She was close friends with Shret and Kimbra until Kimbra succumbed to the effects of grotto[1], and was quite fond of Oksana Kodeira.

As a teenager, Amber attended Ol’ Joshy’s Training Ground for Psychic Soldiers Against Blink Sharks, where she discovered her ability to summon her Arms of the Astral Self and gained quite a bit of renown hunting blink sharks.

At some point before the beginning of the campaign, Amber met and joined forces with Devo la Main and Zoox so that the trio could take work from the Blue Span Brokerage together.

Amber, Devo, and Zoox's relationship began as a working one, more allies and coworkers than friends; despite this, they have become closer over time. Devo and Zoox often looks to Amber for guidance as though she has the final say on work-related matters. On more than one occasion, they have saved each others' lives.

Despite this, their relationship is often contentious; Amber has a tendency to avoid emotional vulnerability, much to Devo's dismay, and Devo's short temper often gets them in trouble, much to Amber's. Amber is particularly displeased by Devo's tendency to talk down to Ol' Joshy; in Episode 38, they get into a loud argument over Devo's behavior and almost come to physical (and magical) blows. Amber tells Devo that he needs to grow up.

Much like her relationship with Devo, Amber and Zoox's relationship began as allies and coworkers. They have since become better friends. Amber appears to be fond of Zoox, although she thinks he is a little naive. Zoox and Devo often look to Amber for guidance, and seem to feel as though she has the final say on work-related matters.

Amber met Ol' Joshy after joining his aforementioned "school." They are quite close; she refers to him as Uncle Joshy, and appears to admire and respect him quite a bit, although that respect often comes in the form mutually beating each other up (or at least attempting to, on Joshy's part.) She and Ol' Joshy have a running contest regarding who can get the drop on the other more, which they refer to as "vibe checks." Obviously, Amber remains in the lead. (They also have a going tally of how many blink sharks they have each killed; as Amber's number grows, Joshy's remains at zero.)

Amber appears to consider the Cloaca and Joshy's Knuckle her home turf. She often goes to Joshy for advice, leads on information, and occasionally work, and has brunch with their fellow finners every weekend.

Amber has explicitly stated that she values her relationship with Joshy above most others, including her friendship with Devo la Main. [2]

Amber and Ballaster Oksana Kodeira are childhood friends. Most notably, when a young Kodeira lost her kaiser blade to the Trash Hole, Amber was the first person Oksana went to for help in retrieving it. Although Amber failed in doing so, it is clear that Kodeira liked and admired her quite a bit.

They were also, at one point, both finners.

As adults, Amber and Kodeira are still friendly. Amber refers to her as "bubba," and the two trade teasing barbs over brunch when Kodeira comes to question Amber over the deaths of two of her Chaperone guards. Despite Amber's admission of guilt, Kodeira does not attempt to take further action against her but instead offers her a job as a Chaperone; it's implied that this is not the first time Kodeira has asked. Amber once again declines, stating that she finds the Biggest Baby "creepy."

Kodeira vouches for Amber (and the Coriolis crew) when they are questioned about the Sallow.

Likewise, when the Hand of Guidance is found dead in her office, Kodeira goes against protocol to give them a chance to investigate on their own, so long as she is kept in the loop. Kodeira comes with them to question Benefactor Orlean, even though Amber doesn't think she can "party."

Amber says that she, Shret, and their mutual friend Kimbra were "practically raised together." She and Shret grew up on the same street and went to school together. Their relationship appears to have fallen apart after Kimbra succumbed to the effects of the drug grotto; Amber seems to blame Shret for what happened to her. She strongly disapproves of Shret dealing grotto, likely because of this.

Amber reluctantly suggests that she, Devo, Zoox, Ampersand Five, and Finneas Cawl ask Shret for help in recovering Finneas's memories. When they meet again, Shret claims that it's been ten years since they've last spoken.

Amber is an older woman in her forties or fifties. She speaks in a soft Southern accent, and is implied to be short, at least in comparison to Devo and Zoox. She claims to have her father's eyes, although after contracting the Sallow, they became enlarged and fish-like with blue irises.

When she wears her vapor suit, there are tentacle-like bags on the sides of her stomach for her Astral Arms, which are translucent and glow green when summoned. 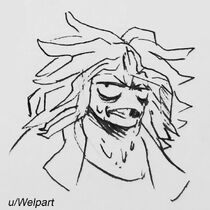 Amber is in the midst of rediscovering her abilities, as they have degraded from disuse after a long period of inactivity following the disappearance of the blink sharks. She is a monk following the Way of the Astral Self. Rather than "ki," Amber uses "vibe" to manifest her abilities.